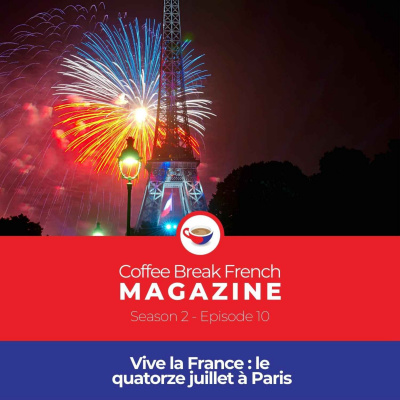 We have reached the final episode of the Coffee Break French Magazine Season 2 and we're going out with a bang as we're discussing one of the most widely celebrated holidays in France - Bastille Day! As we discover how le quatorze juillet is celebrated in Paris, we learn some interesting expressions like grasse matinée, avoir la chance de faire qqch and finir la journée en beauté. Listen out for some reflexive verbs along the way, some examples of direct object pronouns and the use of the perfect tense, the future tense and the imperative. As always, Sophie joins Mark at the end of the episode and this time, they're discussing dates of other national holidays in the French-speaking world.There will be a total of 10 episodes in Season 2 of the Coffee Break French Magazine. If you'd like to benefit from lesson notes, transcripts, vocabulary lists and exercises, you can access the premium version of the Magazine here.Don't forget to follow Coffee Break French on Facebook where we post language activities, c