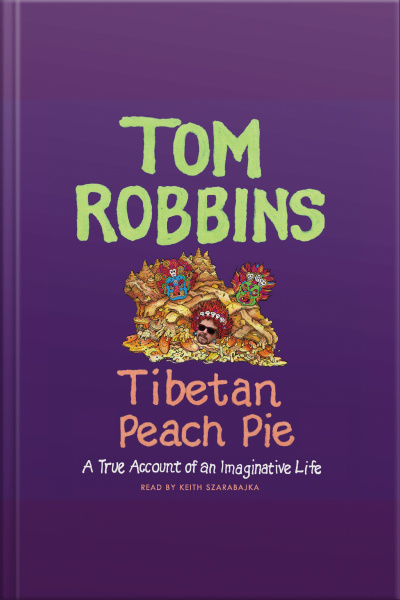 Internationally bestselling novelist and American icon Tom Robbins's long-awaited tale of his wild life and times, both at home and around the globe

Tom Robbins's warm, wise, and wonderfully weird novels–including Even Cowgirls Get the Blues, Another Roadside Attraction, and Jitterbug Perfume–provide an entryway into the frontier of his singular imagination. Madcap but sincere, pulsating with strong social and philosophical undercurrents, his irreverent classics have introduced countless readers to hitchhiking cowgirls, born-again monkeys, a philosophizing can of beans, exiled royalty, and problematic redheads.

In Tibetan Peach Pie, Robbins turns that unparalleled literary sensibility inward, weaving together stories of his unconventional life–from his Appalachian childhood to his globe-trotting adventures–told in his unique voice, which combines the sweet and sly, the spiritual and earthy. The grandchild of Baptist preachers, Robbins would become, over the course of half a century, a poet interruptus, a soldier, a meteorologist, a radio DJ, an art-critic-turned-psychedelic-journeyman, a world-famous novelist, and a counterculture hero, leading a life as unlikely, magical, and bizarre as those of his quixotic characters.

Robbins offers intimate snapshots of Appalachia during the Great Depression, the West Coast during the sixties' psychedelic revolution, international roving before Homeland Security monitored our travels, and New York publishing when it still relied on trees.

Written with the big-hearted comedy and mesmerizing linguistic invention for which Robbins is known, Tibetan Peach Pie is an invitation into the private world of a literary legend.