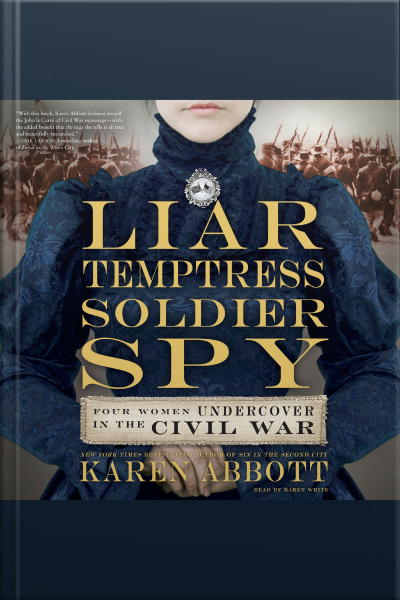 Seventeen-year-old Belle Boyd, an avowed rebel with a dangerous temper, shot a Union soldier in her home and became a courier and spy for the Confederate army, using her considerable charms to seduce men on both sides. Emma Edmonds disguised herself as a man to enlist as a Union private named Frank Thompson, witnessing the bloodiest battles of the war and infiltrating enemy lines, all the while fearing that her past would catch up with her. The beautiful widow Rose O'Neal Greenhow engaged in affairs with powerful Northern politicians, used her young daughter to send information to Southern generals, and sailed abroad to lobby for the Confederacy, a journey that cost her more than she ever imagined. Elizabeth Van Lew, a wealthy Richmond abolitionist, hid behind her proper Southern manners as she orchestrated a far-reaching espionage ring—even placing a former slave inside the Confederate White House—right under the noses of increasingly suspicious rebel detectives.

Abbott's pulse-quickening narrative weaves the adventures of these four forgotten daredevils into the tumultuous landscape of a broken America, evoking a secret world that will surprise even the most avid enthusiasts of Civil War–era history. With a cast of real-life characters, including Nathaniel Hawthorne, General Stonewall Jackson, Detective Allan Pinkerton, Abraham and Mary Todd Lincoln, and Emperor Napoléon III, Liar, Temptress, Soldier, Spy shines a dramatic new light on these daring—and, until now, unsung—heroines.